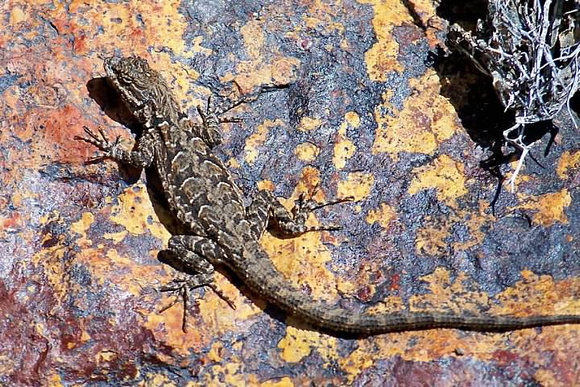 Ornate Tree Lizard, Photographed on Parker Bluffs, highway 288, Tonto National Forest, Arizona. I don't typically point my lens at such small lizards, especially in bright mid-day sun...honestly these little guys are so common to me that I admit they are a bit trivial. And the true ornateness is really the colors on the underbelly. What caught my eye here was a way to showcase the ornateness of its back-pattern texture against the rock's colored texture.

Urosaurus ornatus, commonly known as the ornate tree lizard, is a species of lizard in the family Phrynosomatidae. The species is native to the southwestern United States and northwestern Mexico. The species, which formerly was commonly called simply the "tree lizard", has been used to study physiological changes during the fight-or-flight response as related to stress and aggressive competition. Its life history and costs of reproduction have been documented in field populations in New Mexico and Arizona. It has been fairly well studied because it has interesting variation in throat color in males (within a population) that can correlate with different reproductive strategies.

The ornate tree lizard may grow to a snout-to-vent length (SVL) of up to 59 mm (2.3 inches). As adults, all males have paired turquoise patches of skin on the abdomen; females lack this abdominal coloration. Male ornate tree lizards are found in a variety of colors. While not all populations contain more than one or two colors, 9 color types have been documented within U. ornatus. A population documented in Verde River, Arizona, has two types of coloration patterns among male tree lizards that account for 45% of all males. The first is characterized by a blue spot in the center of a larger orange patch on the throat fan ("dewlap"). The second has a solid orange throat fan ("dewlap"). The orange-blue males are more aggressive and defend territories that can include up to four females. The orange males have longer, leaner body types and are much less aggressive. Orange males can be nomadic during dry years, and during rainy years tend to occupy small territories.
Some, such as Stanford professor and biologist Joan Roughgarden, have suggested multiple male genders in this species. Among differently colored male tree lizards, there are different hormonal profiles. On the day a male tree lizard hatches, researchers think that high blood levels of progesterone and then later, as a juvenile, higher testosterone levels will cause him to develop into an orange-blue type; low progesterone and later lower testosterone levels, as a juvenile, may lead the male to develop into an orange type. During dry weather conditions, orange-type males' corticosterone levels increase, which causes testosterone to decrease, leading them to be more likely to leave their territory and become nomadic. Orange-blue males do not have this hormonal response to the weather, and remain in their territories regardless of climatic conditions.
© 2022 John Morey Photography
Powered by ZENFOLIO User Agreement
Cancel
Continue