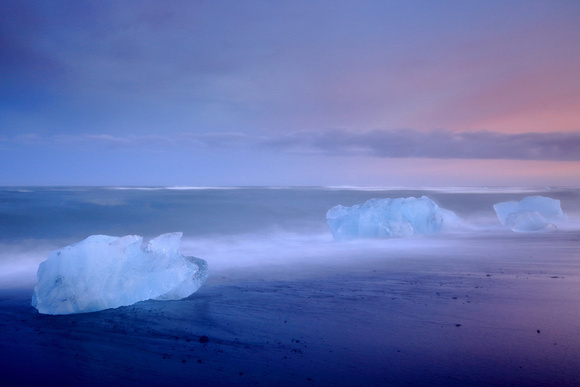 A String of Moody Hues

“Life is a train of moods like a string of beads; and as we pass through them they prove to be many colored lenses, which paint the world their own hue, and each shows us only what lies in its own focus.” ~ Ralph Waldo Emerson

Against the mood of the sunset sea, chunks of glacial ice litter the black-pebbled beach of Jökulsárlón, Iceland, stranded in the crashing surf by their own size and weight. Their ever-changing forms occasionally forced and contorted into new positions by the largest waves that crash upon them. Each of these experiences always causing the moody hues of their unique characters to compliment the flux of the surrounding atmosphere of the surf, sand, and sky. In time, their successive moods of form and color will eventually transform and become one with the ocean, losing the focus of their individuality. In the moments of my own solitude here, with my own life in mind, I could somehow relate. I hoped my moods throughout the crashing surf of life, in my own sunset, would hue so gracefully until I too return to the sea.
© 2020 John Morey Photography
Powered by ZENFOLIO User Agreement
Cancel
Continue