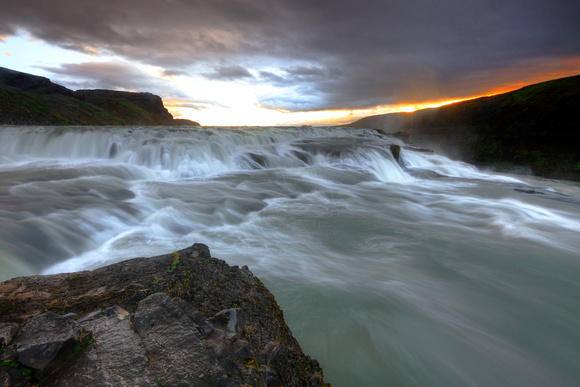 We started our approach high above for a grand view of all below us. Later we descended a bit to another approaching vantage point for a different perspective, but the lighting was not really good at that moment in the drizzling rain – at least down here there was a bit less wind. Finally the workshop leaders instructed us to follow the path down to the very top of the falls where you could photograph upstream or downstream. However down there close to the falls, the windy mist from Gullfoss made getting any shot without water spots near impossible for me, so I settled with this shot of the water upstream cascading down to where I was, before going around me and plummeting down.

The rock of the river bed was formed during an interglacial period and Gullfoss is an example of a waterfall forming where the water has followed a fissure in the lava-laden landscape and carved a passageway through it. The falls themselves consist of a three-step cascading staircase, which then abruptly plunges in two stages into a thundering 2-mile long, 105 foot deep crevice, about 66 feet wide. As one first approaches, you can hear the thunder of the falls, but the crevice is obscured from view, so that it appears that the mighty river simply vanishes into the earth with its rising mists shining in the sunlight where the water ought to be, such as seen in this image just after sunrise. On a sunlit day, the mist clouds surrounding the hammering falls are filled with dozens of rainbows, providing an unparalleled spectacle of color and motion. I wish I could have stayed longer.
© 2020 John Morey Photography
Powered by ZENFOLIO User Agreement
Cancel
Continue