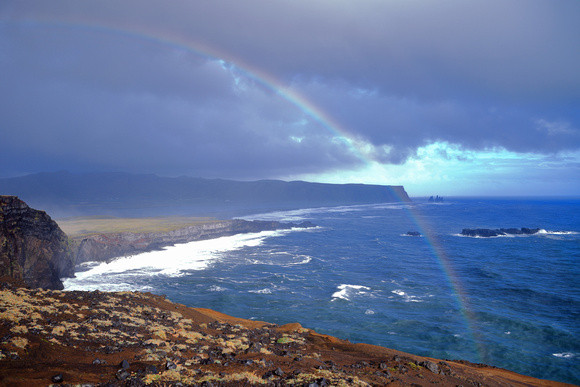 The Watchman Of The Bi-Frost

The cliffs of Dyrhólaey, near the village of Vik (Vík í Mýrdal) on Iceland's South Coast, is a promontory offering expansive views of the coast both East and West, with spectacular displays of the black sand/pebble beach below, as well as daunting outcrops and rock formations. From this view it is easy to lose yourself in the moment and let your mind drift with each repetition of the ocean waves meeting black beach. On the East side of the cliffs a trail leads out across a massive sea arch projecting itself even further out to sea, allowing more daunting and stunning views.

It was from atop this bridging sea arch where I waited, while being beaten by the winds with varied intensities of rain, when I photographed this scene as the weather broke and my patience was rewarded. There it was! The legendary way to Asgard from Midgard, the mighty rainbow bridge revealing itself to me as if I were the legendary Heimdall, the Watchman of the Bi-frost.

When the event was over, I was reminded of the words of my trip leader, which were deemed quite accurate on this shoot, “If you don’t like the weather in Iceland, just wait 15 minutes because it is bound to change.” Ten minutes before in fact, some self-proclaimed famous Korean photographers, who I met with professional courtesy while sharing the space, started to pack up from the rain exposure. I imparted to them as best I could with their broken English the same remark about liking the weather in Iceland, as if I was some all-knowing Asgardian God, with an exact pulse of all the elements around me, like Heimdall who possessed the ability to see the grass growing. They were delighted that they lingered, and later on requested I pose for the main photographer in their group, as a model in one of his photographs…too funny.

Below the cliff-edge at my feet, the sea air was extremely rich in birdlife, predominately fulmars and guillemots. While I was told that the puffins had moved on a few weeks prior to my arrival, I witnessed some last stragglers flying away over the sea stacks in the distance…if you have been following my adventures here, you might recognize those small gigantic monoliths at the end to be The Trolls of Reynisfjara Beach.
© 2020 John Morey Photography
Powered by ZENFOLIO User Agreement
Cancel
Continue