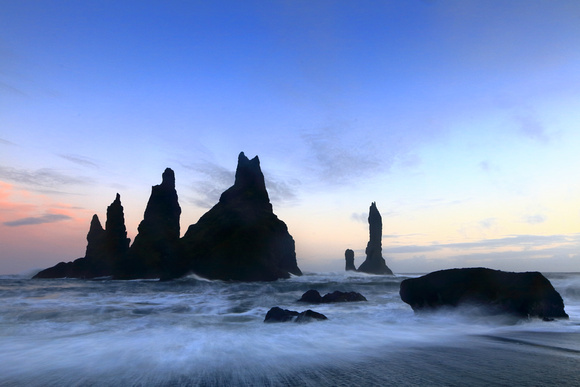 The Trolls of Reynisfjara Beach

Reynisfjara beach, near the village of Vik (Vík í Mýrdal) on Iceland's South Coast, is widely thought of as the most beautiful Icelandic black-sand/pebble beach. The black pebble beach consists of smooth black near-polished stones about the size of your thumbnail, sometimes interlaced with the same size pebble if a rusty red color. I could not help myself and had to collect a varied handful of the pebbles to bring home. At first when you start walking it seems quite expansive but as you walk along it to the East, the beach narrows and becomes guarded by a high cliff of basalt columns resembling a rocky Tetris game, called Gardar. This black sand and pebble beach is interlaced with caves and pyramid structures that’ll leave any visitor in awe.
Of particular interest, out in the sea near this point, are basalt sea stacks rising majestically out of the torrential surf, named Reynisdrangar – enigmatic-shaped to towering needle-points. According and keeping to Icelandic folklore – which is still steeped heavily with modern day beliefs in gnomes, elves, trolls and other mythical hidden people – legend says that Reynisdrangar originated when trolls attempted to drag a ship with three masts from the ocean to the shore, but they were unsuccessful because of an argument about where on the beach they should place the ship. While still arguing, the sun rose and daylight broke upon them, causing them to petrify and turn to stone. As I photographed these forms as the day’s setting sun began to give way to a colored and gloomy dusk, I wondered if their looming forms might come alive again in the middle of the night to continue their unsuccessful attempts and rage amongst the surf.

This area is also extremely rich in birdlife, including puffins, fulmars and guillemots. While I was told that the puffins had moved on a few weeks prior to my arrival, I witnessed some last stragglers flying away over the sea stacks.
© 2020 John Morey Photography
Powered by ZENFOLIO User Agreement
Cancel
Continue