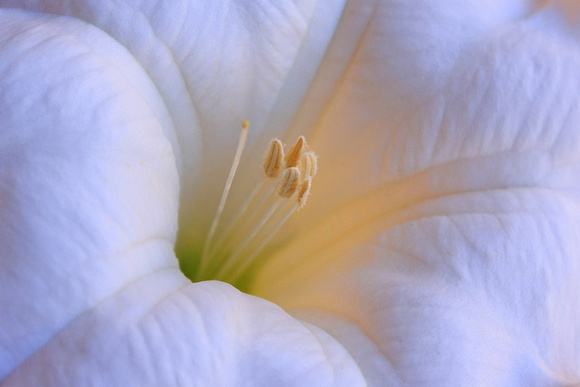 Photographed along the Colorado River while rafting through the Grand Canyon. We stopped for lunch on the shore at this particular location, which was rich in soft and beautiful Sacred Datura.

Datura wrightii or Sacred Datura is the name of a poisonous perennial plant and ornamental flower of southwestern North America. It is sometimes used as a hallucinogen. The flowers are the most striking feature, being sweetly fragrant white trumpets up to 8 inches long, often tinted purple, especially at the margin. It can bloom from April to October. In clear weather, flowers open at nearly full dark and wither a few hours after sunrise the following morning; in cloudy weather, they may open earlier and last longer. Datura is found in northern Mexico and the adjoining U. S. states, as far north as southern Utah, in open land with well-drained soils. It is also commonly planted as an ornamental, especially in xeriscapes.
© 2021 John Morey Photography
Powered by ZENFOLIO User Agreement
Cancel
Continue