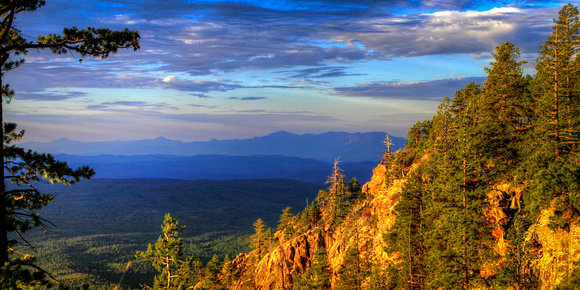 "Climb up on some hill at sunrise. Everybody needs perspective once in a while, and you'll find it there." ~ Robb Sagendorph

The Mogollon Rim is an escarpment defining the southwestern edge of the Colorado Plateau, and along its central and most spectacular portions is characterized by high limestone and sandstone cliffs. The American Indian culture known as the Mogollon lived in the southwest from approximately AD 150 until sometime between AD 1400 and AD 1450. The name Mogollon for both the Native American culture and the geographic locations of the Mogollon Mountains and the Mogollon Rim comes from Don Juan Ignacio Flores Mogollón, the Spanish Governor of New Mexico from 1712 to 1715.

Often when I'm here alone with myself, I consider my perspective on the world and often wonder about the perspective others have felt and if they are at all different in their base forms. The western novel author, Zane Grey, built a hunting cabin on the actual slopes of the Mogollon Rim just northeast of Payson, above Tonto Creek. This cabin was restored by the Phoenix, Ariz., air-conditioning magnate William Goettl during the late 1960s, but it was destroyed by the Dude Fire in 1990. Several of Grey's widely read novels, were either set in this general area of the Old West, or inspired by it. The novel-writer Louis L'Amour's novel The Sackett Brand was also set in the area of the Mogollon Rim, with the cliffs of the Rim being specifically described.
© 2022 John Morey Photography
Powered by ZENFOLIO User Agreement
Cancel
Continue