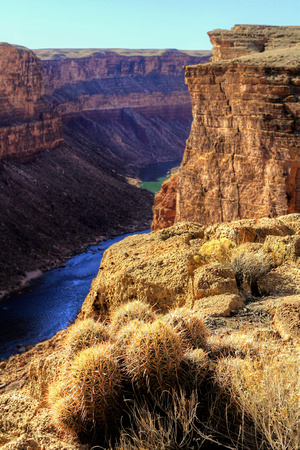 A River Flows Through Us

"Rivers flow not past, but through us; tingling, vibrating, exciting every cell and fiber in our bodies, making them sing and glide." - John Muir

Perhaps no other river of the great American Southwest flows through us as much as the Colorado River. The 1,450-mile (2,330 km) river drains an expansive, arid watershed that encompasses parts of seven U.S. and two Mexican states. Rising in the central Rocky Mountains in the U.S., the river flows generally southwest across the Colorado Plateau before reaching Lake Mead on the Arizona–Nevada line, where it turns south towards the international border. After entering Mexico, the Colorado forms a large delta, emptying into the Gulf of California between Baja California and Sonora. Known for its dramatic canyons and whitewater rapids, the Colorado is a vital source of water for agricultural and urban areas in the southwestern desert lands of North America. The river and its tributaries are controlled by an extensive system of dams, reservoirs and aqueducts, which furnish water for irrigation and municipal supplies of almost 40 million people both inside and outside the watershed.

The Colorado's steep drop through its gorges is also utilized for the generation of significant hydroelectric power, and its major dams regulate peaking power demands in much of the Inter-mountain West. Since the mid-20th century, intensive water consumption has de-watered the lower 100 miles of the river such that it no longer reaches the sea except in years of heavy runoff.