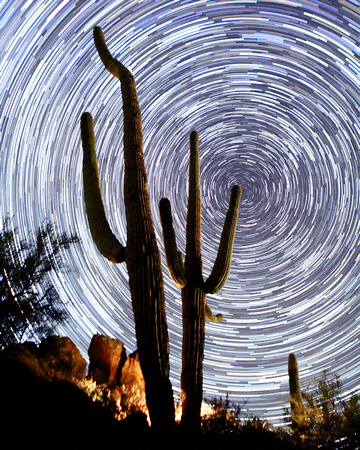 “Be clearly aware of the stars and infinity on high. Then life seems almost enchanted after all.”
― Vincent van Gogh

I have a lot of concepts in my mind of dramatic imagery I wish to create, so when the call of the wild propelled me to join my photography peers one January Winter night to photograph the stars during the New Moon, I knew instantly the kind of image I wanted to compose. Of course finding the right Sonoran desert setting was going to take some patience, and persistence. Finally after miles of meandering dirt road and negotiation with my associates, we finally settled on this scene.

It was a bitter cold night, punctuated by being the first hard desert freeze of the winter. For those not from this area who don’t realize, the Arizona desert can be just as deadly on a cold winter night, as on a hot summer day. There is no forgiveness here, just your wits, wiles, and spirit to keep you going. We started shooting around 10pm when it was 33 degrees Fahrenheit, and after a couple hours my peers decided to call it a night. However, once I am in the moment and creation is upon me, there is no stopping until the spirit of the scene has been deemed whole and complete. I would stay on, by myself, for the rest of the night. I bid farewell to my friends, opened a beer, and settled in watching the stars.

I worked all night, until I had expended the energy from my two camera batteries, and as I made my way off the high ridgeline back down to my Jeep at 5:30am, I reveled in the delight the crunching sound of my boots made from the crispy layer of frost covering every grain of sand and fallen needle of Cactus. When I reached the Jeep, it was now 17 degrees Fahrenheit! And as I drove home, I wondered if my Starry Night would be something Vincent Van Gogh might have appreciated, and then it also occurred to me that despite having both my ears, perhaps I was just as romantically crazy as him. Finally, the natural world snapped me out of such wondering and rewarded me with a marvelous sunrise. Life is good.

Technically speaking, I knew without question exactly how I would execute the shot with my camera settings, however from a compositional perspective there were some challenges to overcome. Stars by themselves are beautiful, but how can I capture the image such that anyone viewing it can connect with this lonely land I know? I knew I had to capture the true essence of the Arizona Sonoran desert, and nothing says Arizona like the Saguaro Cactus, which only occur in this little corner of the world. But was a Saguaro Cactus with some nice character enough? Maybe, but it felt important to create one additional effect to help further that old-west lonely cowboy mystique that has also left an imprint on this region. Thus I settled upon this Saguaro Cactus, atop a ridge-line and backed up to a rocky outcropping, with a flashlight positioned just right to cast what would seem like a campfire glow.

The last compositional hurdle was then to place myself in such a way, so as to use Polaris (The North Star) as a key element in my story. It would not be enough to just include Polaris somewhere in the seemingly spinning sky – Polaris must be placed with exactness, such that it is held on the end of the last arm of the cactus. Achieving this exactness was accomplished two ways. First by own knowledge of sky, I was able to quickly locate and position Polaris, and then secondly through the power of technology, I used an app on my smart phone to verify and slightly tweak my position in relation to the star. The only thing left to do now was let the natural world take over. I hope you enjoy this image as much as I enjoyed creating it.