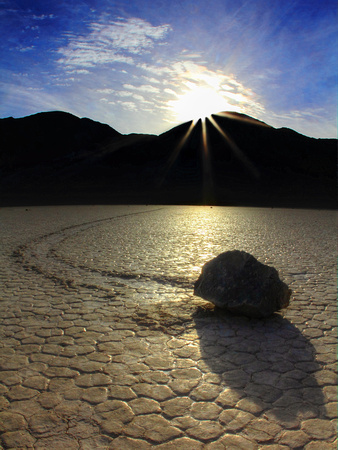 "Let perseverance be your engine and hope your fuel." ~ H. Jackson Brown, Jr.

In a remote dried up lake bed in Death Valley, California, known as "The Racetrack", there exists a phenomena that to this day is still largely unexplained. In the most Southern end of the racetrack, over a half a mile from the nearest dirt road, there a great many rocks and boulders, ranging from a few pounds up to 40+ pounds, inexplicably move at certain times of the year under certain conditions.

Popular theory is that the lake bed gets just barely wet and gale-force winds spinning around this valley can cause the stones to sort of sail slowly along the lake bed and leave evidence of their path over time. Perhaps the most interesting thing about this is that no two rocks follow the same type of path. Some move in a circular fashion, such as the one pictured here, while others move several yards, make a hard right turn for a few more, then turn back the direction they were originally going or in a new direction all together.
© 2022 John Morey Photography
Powered by ZENFOLIO User Agreement
Cancel
Continue