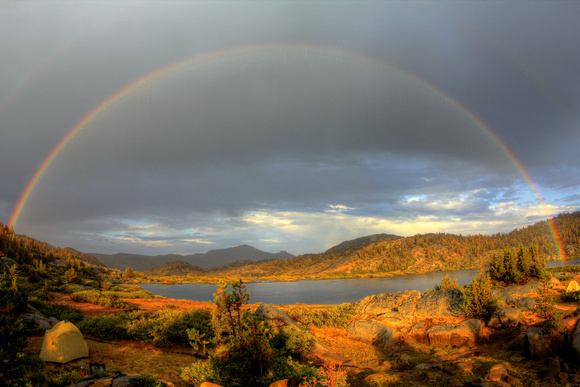 At the base of Thousand Island Lake, near the base of Mount Banner, in the Ansel Adams Wilderness. Upon arrival and setup of my campsite, only a mere hour of sunshine and delight existed before the surrounding clouds in all directions converged overhead and then chose not to move. The lightning strikes, multiple hale falls, steady hard rains, and saturated clothing forced me into hiding and depression. The storm after 6 hours eventually abated in the early evening not allowing any opportunity to dry out.

The next morning the clouds and storm returned for a second 8 hour assault, forcing me into hiding and depression again. In these hours I considered many things about myself and what I was up to and if there would be any chance to redeem my goals on this adventure. Once or twice I ventured out into the fray to speak to the skies and request a truce, only to be forced into siege again and again. It seemed another day of my life would be squandered without reward.

It was in the moment of my deepest despair, just five minutes before final light of the second day, when my shelter turned ablaze in a bathing of light. I ventured out again to see what cruel joke was being played on me now, but in the distance down by the lake I could hear the faint report of one of my associates cry out "RAINBOWwwwww". I quickly turned to the East and upon seeing the magnificent beauty I could only exclaim in my loudest boom the same; "RAINBOWwww". As I hurried my camera gear, dressed only in long underwear, I could hear the same report echoing over and over again at different points around the lake by others who had been enduring the same. In the last moments of light as I composed my art, this report of Sunshine's Pledge continued to echo. And as soon as I was complete in my craft the sun finally fell surrendering to darkness. For 14 hours of suffering, this image was my reward -- and I was at peace.
© 2022 John Morey Photography
Powered by ZENFOLIO User Agreement
Cancel
Continue