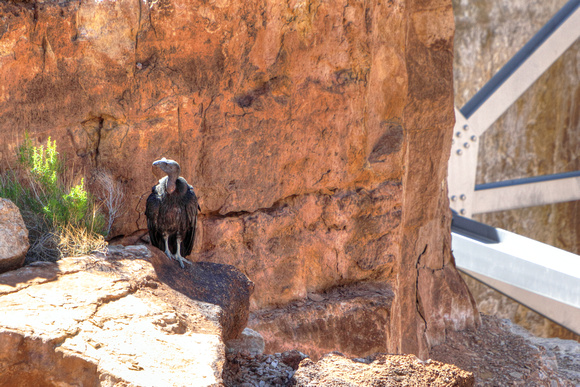 Death Does And Does Not Become Them

Back during the Pleistocene epoch, North America was home to animals that were giants compared to today’s standards – mammoths, mastodons, giant sloths, saber-toothed tigers, etc. – and the birds were gigantic as well. When the huge animals died, giant vultures with 20-foot wingspans would swoop down to feast on their carcasses. And then they vanished, for reasons scientists still theorize about. Most large animals went extinct quickly and the huge-sized variety of Vultures, Eagles, Teratorns, and giant condors were suddenly hungry. With their food sources gone, the giant vultures soon followed the animals into mass extinction – all except one: The California Condor. As the sole-surviving Pleistocene castaway, Gymnogyps californianus survived over the ages because it found new food sources, such as beached whales and dead cows, and didn’t have enemies at the time.

Fast forward to 1987, and the condors were once again on the brink of complete extinction. They had a new enemy: people. Electric power lines, lead poisoning (bullets in carcasses), habitat destruction, egg collecting, DDT poisoning, and poaching led to the condors’ aggressive decline to the point that they were literally left with one wing in the grave and nearly all hope had been lost. At that time, only 27 condors remained alive, all in zoos after being captured. With successful captive breeding programs, their numbers are now on the rebound and reintroductions back to the wild among three different sites in southern California and the Grand Canyon have been doing well, with the world's population over 200 birds.