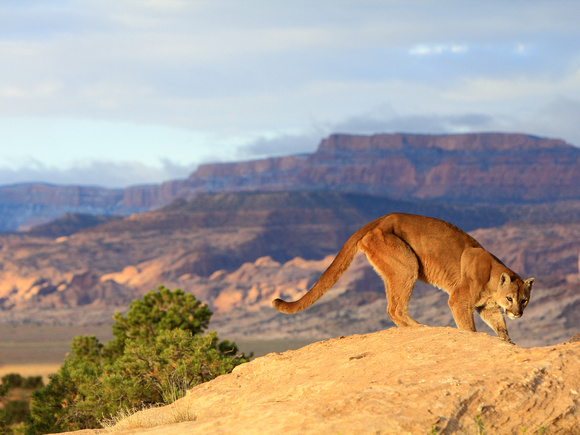 Puma concolor is the Latin name for the cat of many names, including Cougar, Catamount, Painter, Panther. Ghost Cat, Puma, Shadow Cat, and as Mountain lion. I cannot vouch for how each of these common names came into being, but it most certainly is due to some regard to regional differences in the massive distribution of this cat. When Europeans arrived in the Americas, mountain lions ranged from Canada to Tierra del Fuego, from the coasts of both oceans to the peaks of the Appalachians, Rockies, and Andes. The only large mammals more widely distributed throughout the western hemisphere were humans, so every Native culture except those in the Arctic encountered lions--a fact that contributed to the long list of names by which the animal became known to European settlers.

In speaking of the many names of cougar, one folktale tells the story of Native Americans who would bring pelts to trade in what is now New York City. When the Europeans and white settlers would question why all only skins of females (given the lack of manes) were brought for trade, the Native Americans explained that the males lived far away in the mountains, playing a joke of sorts on the naïve newcomers—this is why cougars, who are not specific to mountain regions at all, came to be known as “mountain lions”.
© 2022 John Morey Photography
Powered by ZENFOLIO User Agreement
Cancel
Continue