How did the Bald Eagle become America’s national symbol?

On June 20th 1782, our fore fathers adopted the bald eagle as our American National emblem.

During this time there were some fierce arguments by other political leaders in not having the Bald Eagle represent America.

Ben Franklin believe or not wanted the Great Seal of the United States to be a turkey, because of its traditional values the Native Americans had for it.

The fierce beauty and proud independence of this great bird symbolizes the strength and freedom of America. 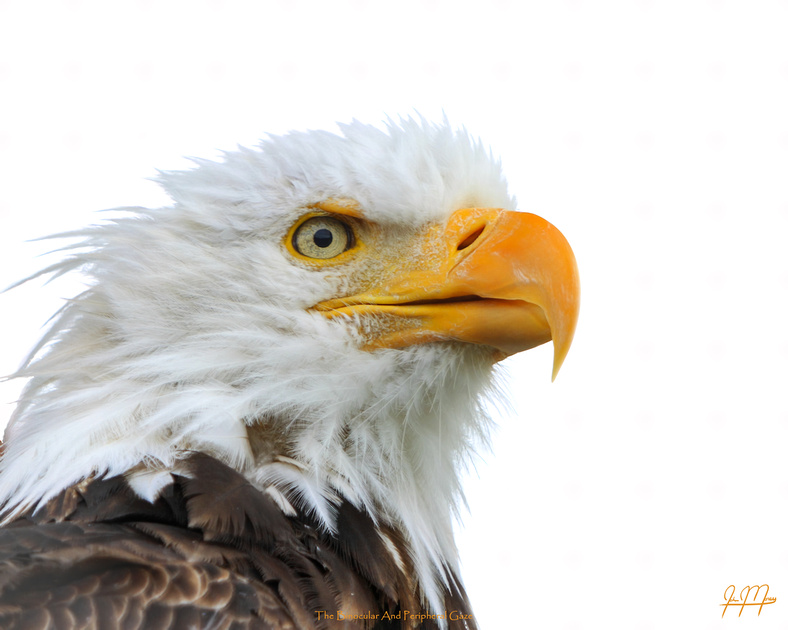 The Binocular And Peripheral GazeBald Eagles have excellent eyesight and the frontal setting of their eyes gives them excellent binocular vision as well as peripheral vision. Their favorite food is fish, but they will also eat other birds, ducks, muskrats and sometimes turtles. They also they eat carrion willingly, and are notorious for robbing osprey of their catches. The eagle's sharp, hooked beak helps it tear through its prey.

Nothing excites me more than supporting a friend. Yesterday, knowing how Bald Eagle Day was today, I had express to my friend John, how I wanted to share his photography on my blog.

A very supportive person, he suggested I go to his website and pick out some picture I liked to support Bald Eagle Day, which I encourage you to do the same, by checking out his website (click here ), embrace the beauty of John Morey’s Photography.

Without further ado these were the shots I picked out for Bald Eagle Day, from well-known photographer John Morey. 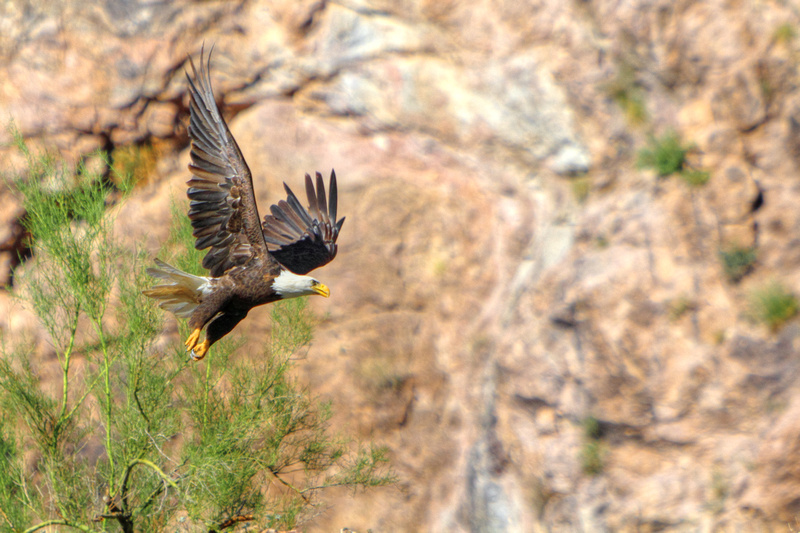 Bald eagles in the Sonoran Desert are officially threatened no more. The U.S. Fish and Wildlife Service removed them from the list of endangered and threatened species in September of 2011. The long-expected move - it essentially took effect the year before in 2010 with a federal court ruling. The ruling came a day after the Arizona Game and Fish Department reported record numbers of bald-eagle eggs laid, breeding areas occupied, and eaglets taking flight in the state. They are such a great success story, and noticeably so in the past few years, that it would be an unusual day for me to look for them and not find them.

In 1782, when the eagle ascended to its position as the national symbol, around 100,000 nesting pairs lived throughout the United States in habitats ranging from Alaska to northern Mexico.

In 1940 with the passage of the Bald Eagle Protection Act, which made it a crime to take or sell the eagles, would take over 40 years in ushering the bald eagle back from the brink of extinction.

By 1963, the U.S. Fish and Wildlife Service estimated that only 417 nesting pairs remained, despite our government’s efforts to protect the dwindling bald eagle.

It’s a federal law to kill or injury a bald eagle; wind farms especially have killed hundreds of thousand bald eagles each year. 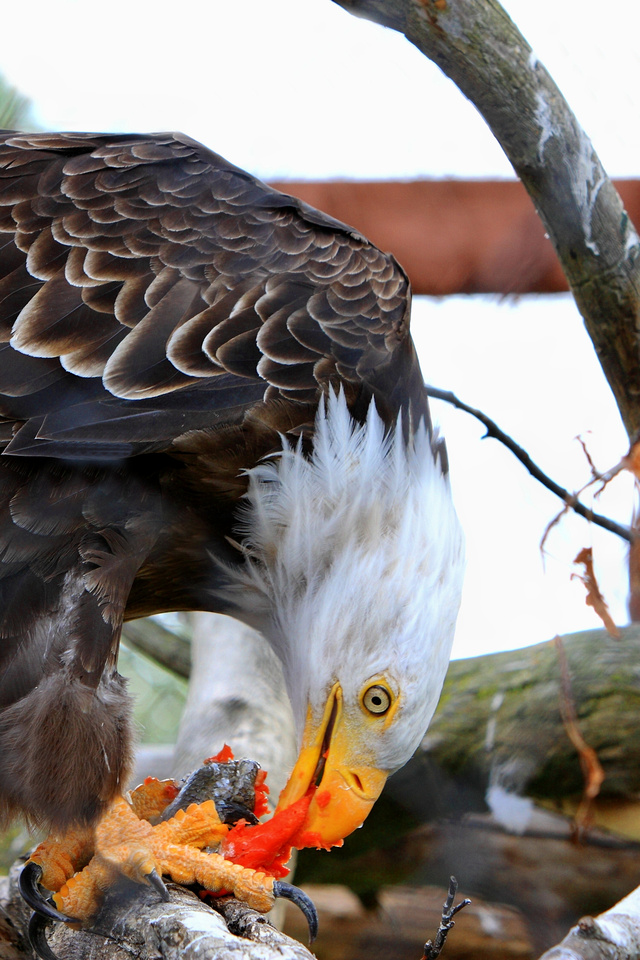 Living On Perpetual Occasions Of Hope"The charm of fishing is that it is the pursuit of what is elusive but attainable, a perpetual series of occasions for hope." ~ John Buchan

The Bald Eagle is an opportunistic carnivore with the capacity to predate a great variety of prey. However throughout their range, fish comprise the majority of the eagle's diet. In Southeast Alaska where this Eagle was photographed, fish comprise approximately 66% of the year-around diet of Bald Eagles and 78% of the prey brought to the nest by the parents.

Southeast Alaskan eagles, such as this one pictured, largely predate Pink, Coho, and Sockeye salmons, but any spawning trout or salmon from summer throughout fall is a target. Even eagles living in relatively arid regions still typically rely primarily on fish as prey. In Sonora, Mexico and Arizona, 77% and over 73%, respectively, of prey remains at the nests were from fish, largely various catfish and Rainbow trout.

On April 6, 1917, while Americans declared war on Germany, the following day on April 7th, the Alaska Territorial Legislature took steps towards declaring war on the American Bald Eagle.

Alaska’s war against eagles last for 36 years, from 1917 until 1953, the trig happy citizens were convinced by a recommendation from federal official E. Lester Jones, the deputy U.S. Commissioner of Fisheries quoted, “That all Bald Eagles should be condemned because of their destructive behavior in saving the salmon, and their spawning ritual. British Columbia has bounty on these destructive birds and I think that we should too!”

During this war on Bald Eagle, the legislative action that encouraged the slaughter of these magnificent creatures was ignored by the press, both in and out of Alaska.

So if this is your first time your hearing this about Alaska, you’re not alone, but what’s truly important now, is having an open awareness of how you can help our American symbol regain a come back.

Just remember how the Bald Eagle, gave us our strength to recover from 911, symbolizing to terrorist how strength and freedom can never been taking away from us, isn’t it time to give the Bald Eagle back its freedom too?

A special foundation has been designed to help the bald eagle, for more information on this concern please (click here). 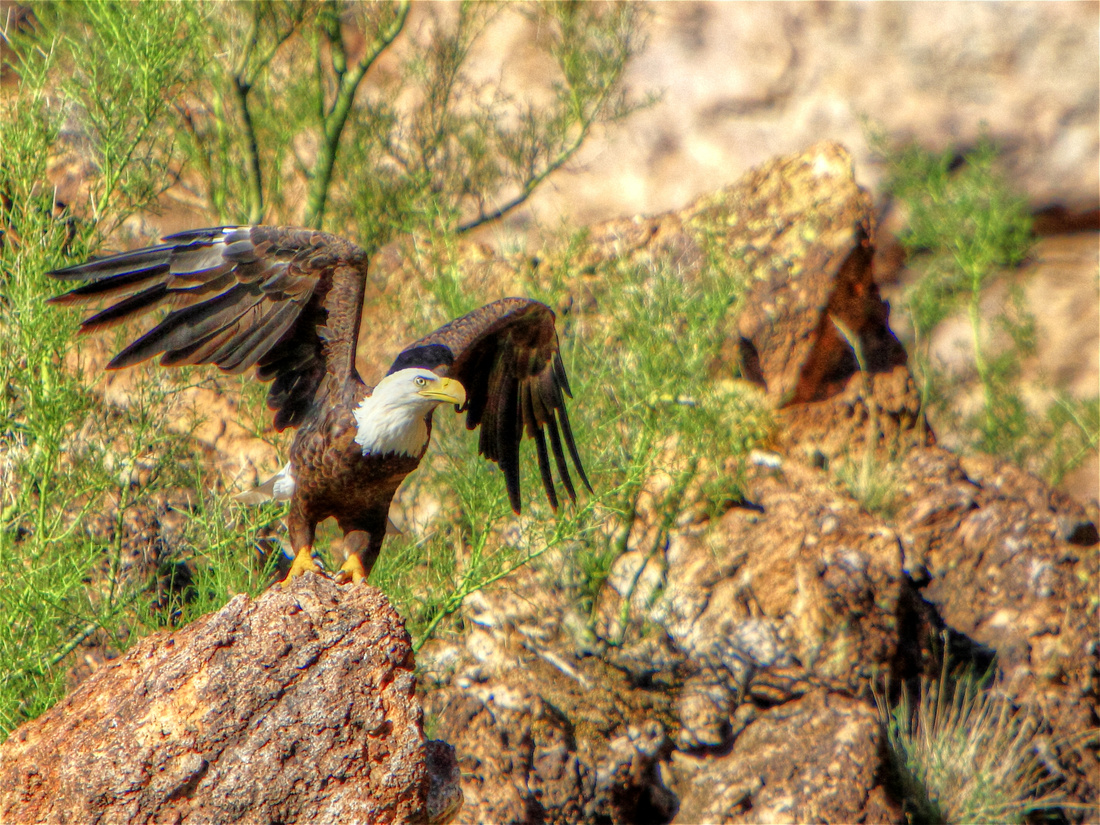 National Emblem Of RecoveryThis Bald Eagle was photographed on the cliff-banks of Canyon Lake, Arizona. 10 years ago I only saw one Eagle here in Arizona my whole life. In the past 3 years I've seen on average of 10 each year, with the majority of them being either in the Phoenix area, or within 50 miles of it. It is a great success story.

Very little information existed on the species in Arizona when bald eagles were first listed as endangered. Only 11 breeding pairs were known. Scientists first believed the population in the southwestern United States was historically small and on the fringe of its suitable habitat. Land and wildlife resource managers in Arizona began an intensive research, monitoring, and management program after the bald eagle was listed that successfully recovered the species to more than 50 breeding areas statewide. Although the bald eagle has been removed from the Endangered Species Act nationally, the population in Arizona still requires management to maintain its current size. The Arizona Game and Fish Department and the Southwestern Bald Eagle Management Committee have developed a cooperative management plan to maintain and increase the bald eagle population in Arizona.

In closing, there’s so much we can learn in ourselves in regards to the Bald Eagle.

The Bald Eagle signifies a new beginning is coming soon. The positive beginning in what you give out is what you’ll receive. 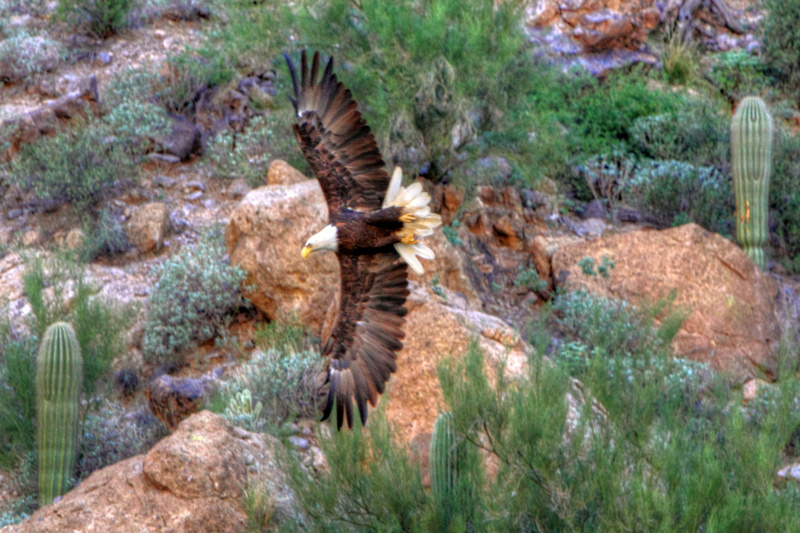 Sonoran Bald Eagle of Canyon LakeThis Bald Eagle of Arizona is one of many that I often see living at Canyon Lake, AZ. In this scene, the eagle had been hovering over a part of the lake for several seconds, and is shown here making a sharp banking turn before diving to the water and making an attempt to catch a Rainbow Trout

The bald eagle in Arizona has experienced a large population increase since the species was listed under the Endangered Species Act in 1978. At that time, only 11 breeding pairs had been identified. Since then, multiple studies and intensive management projects have contributed to our knowledge of the bald eagle in Arizona, and the population has grown. This growth, not only in Arizona but nationwide, prompted the U.S. Fish and Wildlife Service to remove the bald eagle from the Endangered Species Act in 2007.

In 2008, a federal court order returned bald eagles living in parts of Arizona to the endangered species list until the U.S. Fish and Wildlife Service could complete a status review of the species. In 2010, the U.S. Fish and Wildlife Service decided that bald eagles in Arizona are not a separate and distinct population that needs protection under the Endangered Species Act (ESA), and the species in Arizona was officially removed from the Endangered Species List the following year.

Although the Arizona Game and Fish Department supports classifying the population as a distinct population segment for biological reasons, it supports removing the species in the Sonoran Desert from the list due to the existence of the Bald and Golden Eagle Protection Act and the comprehensive bald eagle management program led by Game and Fish.

The spiritual awakening in the Bald Eagle, helps brings opportunities to us, by helping us remain grounded. When souring high, its talon remind us how to grasp onto patience, while holding onto wisdom.

The Bald Eagle reminds us, that you must become much more than you have dreamed possible, which symbolizes the strength and freedom of America.

“Let Me Draw for You!” Check out my commercial freelance website and (click here) to see my portfolio & prices.

Thanks for reading and I hope you enjoyed.

Don't miss any of my latest blog posts!